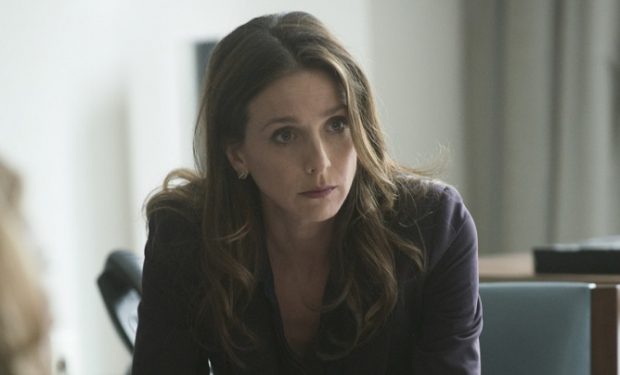 In the Madam Secretary episode “The Great Experiment,” just days before officially declaring her candidacy for president, Elizabeth McCord (Tea Leoni) learns The Washington Chronicle is about to publish a news article alleging she had an affair with President Conrad Dalton (Keith Carradine) during her CIA days. Elizabeth says “It’s straight up defamation” and “a compete load of crap” while her campaign staffers, Mike B. (Kevin Rahm) and Jay (Sebastian Arcelus), disagree about how to handle the situation. Some wonder if Elizabeth’s old friend, CIA analyst Isabelle Barnes might be the source.

In Season 1 of Madam Secretary, Elizabeth, Henry (Tim Daly), and Isabelle worked closely together to figure out what really happened to their friend Vincent Marsh, former U.S. Secretary of State, who died in a plane crash. In the 2015 episode “Whisper of the Ax,” Elizabeth reluctantly had Isabelle arrested when suspected of treason during an undercover operation in Turkey. Isabelle was later cleared but that was the last time we saw her.

Isabelle is portrayed by Marin Hinkle. She’s known for her roles on Speechless (Principal Dr. Miller), The Marvelous Mrs. Maisel (Rose Weissman), Homeladn (Christine Lonas), and Two and a Half Men (Alan’s ex-wife Judith), among others. Fun fact: Hinkle made her acting debut in the 1994 film Angie starring Geena Davis and James Gandolfini. Madam Secretary airs Sundays at 10 pm on CBS, right after NCIS: Los Angeles.