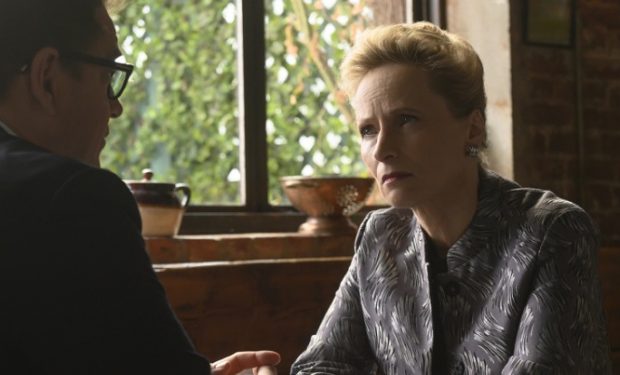 In the Bull episode “The Good One,” Bull (Michael Weatherly) worries that his client’s family ties will negatively impact the jury. His client, Connor McCandless (Garrett Foster), is the seemingly innocent young heir of an infamous crime family who’s on trial for murder with his brother. As the trial begins, Bull tries to convince his client to sever his trial from his brother’s, which would pit the siblings against each other in court. Their mother Colleen McCandless is very much involved in the case.

[Colleen wears a smart jacket like this one by Modern American Designer, $70]

Colleen is portrayed by Laila Robins. She’s known for her roles on Deception (FBI Agent Deakins), Murder in the First (Jamie Nelson), Homeland (Martha Boyd), In Treatment (Tammy Meswick), The Book of Daniel (Noar Paxton), and in films including An Innocent Man with Tom Selleck (Kate Rainwood), Clint Eastwood’s True Crime (Patricia Findley), Planes, Trains & Automobiles (Steve Martins’ wife Susan Page), and A Walk on the Moon (Marty Ellis), among others. Bull airs Mondays at 10 pm on CBS, right after The Code.