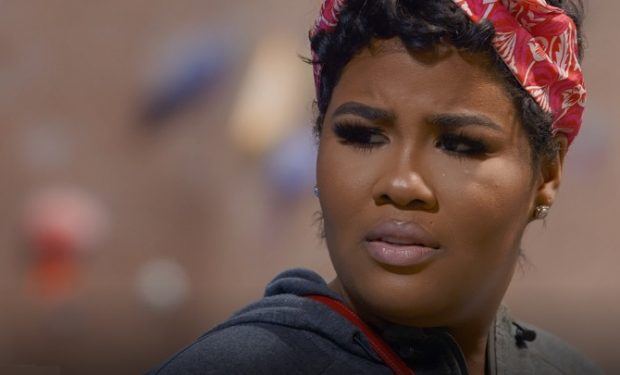 In the Love & Hip Hop Atlanta episode “The Immaculate Conception,” Tiarra meets up with rapper Akbar V. While watching their kids climb at an indoor rock climbing place, Tiarra asks Akbar to “add one more thing on your plate and help me and Moniece to meet.” After learning that her baby daddy Scrapp has been seeing Moniece Slaughter, Tiarra thinks if she meets with Moniece, she’ll get “the details about her and Scrapp’s relationship that I know I won’t be able to get out of Scrapp.” Akbar tells Tiarra, “Oh, hell no.” She doesn’t want to get involved in that love triangle. She tells Tiarra, “Girl, you’re stuck on stupid for real.”

Akbar V was born Valerie Raven. The 29-year-old rapper from Atlanta is a cousin of Grammy Award-winning songwriter, former member of the girl band Xscape and Real Housewives of Atlanta star Kandi Burruss. On Love & Hip Hop: Atlanta, Akbar tells Tiarra she’s grateful to Kandi for helping her get a condo in a neighborhood unlike the one she grew-up in. Akbar is the mother of five children: one is the son of rapper Young Thug.

In 2016, Akbar was shot in the back of the head while walking out of a club. She thinks a bullet ricocheted off a car and went into her head. She says she’s a walking testimony of God. She was told, “the bullet exploded in your skull.” She says when she got to the hospital, they didn’t operate because it was too risky. Love & Hip Hop Atlanta airs Mondays at 8 pm on VH1, right before T.I. & Tiny: Friends and Family Hustle.