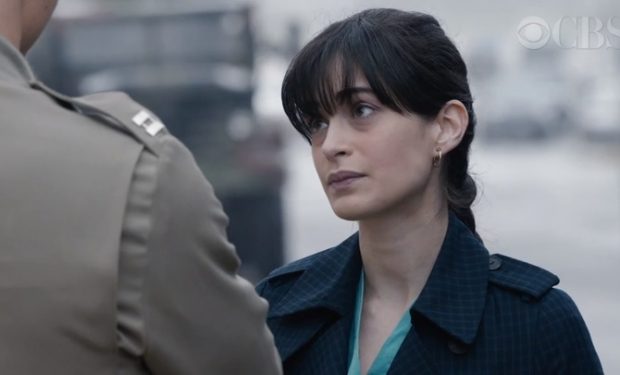 On The Code episode “Molly Marine,” while Major Ferry (Ato Essandoh) and Lt. Harper Li (Phillipa Soo) are on a mission to find out who leaked information about a Marine who was set to become the Corps’ first female infantry captain, Capt. John “Abe” Abraham (Luke Mitchell) is approached by his best friend’s widow, Alex. She tells him that a lawyer has approached her about suing the Corps for her husband’s wrong death.

[Alex wears a blue windowpane trench coat like this one]

In the clip below, Alex tells Abe she wanted Abe to hear the news from her “before you get a subpoena.” She explains, “If it goes to trial, my lawyer is going to ask you to testify.” It’s an awkward conversation. She’s not asking him to do it or not. It’s happening whether he likes it or not (he doesn’t).

Alex is portrayed by Justine Cotsonas. She’s best known for her roles on CBS’s Tell Me a Story (Carla), Sneaky Pete (Shannon), and the daytime soap opera As the World Turns (in her debut acting role, Sofie Duran), among others. The Code airs Mondays at 9 pm on CBS.