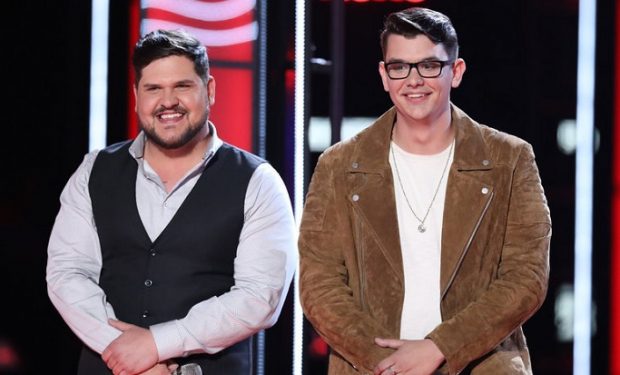 On Season 16, The Voice introduced Cross Battles, where two singers from two different teams battle it out and they don’t know who they’re competing against until they walk on stage. Not all Voice fans were crazy about the new tactic. However, most on Facebook are rooting for 27-year-old Dexter Roberts from Alabama on Team Blake. For his Cross Battle, the country singer sang the 2006 CMA Song of the Year “Believe” by Brooks & Dunn and nailed it.

His competitor, Andrew Jannakos, the 25-year-old from Georgia on Team Adam, sang the 2017 song “Yours” by Russell Dickerson. After the performances, Andrew wrote: “Tonight was insane!! I knew battling @dexterrobertsmusic wouldn’t be an easy task, the man is insanely talented. We both killed it tonight and I am blessed to have been able to share the stage with him.”

Dexter has the advantage of having a larger fan base: he has more than 30k followers on Instagram, Andrew has a little more than 5k. The artists learn if they will be moving forward on Tuesday, April 16. The Voice airs Mondays and Tuesdays at 8 pm on NBC.