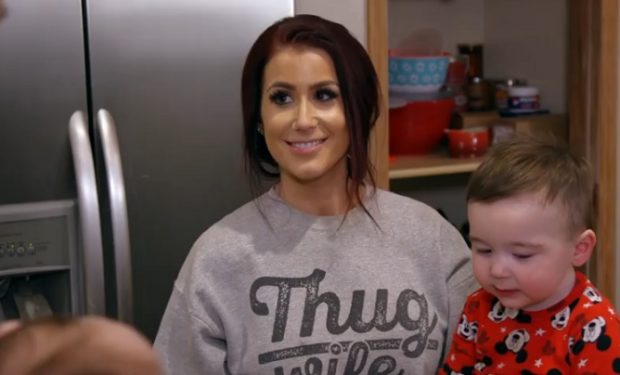 On the Teen Mom 2 episode “Home is Home,” while Kail gets a surprising call from Jo’s wife about their child support battle, Nathan and Jenelle go back to court. On a more peaceful note, Chelsea enjoys family time with her husband Cole, recently turned 9-year-old daughter Aubree and her babies, Watson and Layne. The family wasn’t able to do anything for Aubree’s birthday because it fell the week after Layne was born. And on her actual birthday, Chelsea was suffering from sinusitis in both breasts.

[Chelsea wears a Thug Wife sweatshirt like this one]

In the sneak peek video below, Chelsea praises Aubree for being such a big help around the house. Aubree is seen fetching a bottle for Watson’s bottle time and grabbing the bouncy chair for Layne. In front of Aubree, Chelsea tells Cole, “It would be way harder with two (kids) under two without Aubree. She is like so much help.” Aubree jumps right in says, “I take his (Watson’s) coat off, his shoes off, sometimes I put them on.” Chelsea tells Aubree, “You’re gonna be a good mama someday,” after a pregnant pause, she adds, “when you’re 40.” Cole says, “Yeah, some day.”

When out of the earshot of Aubree, Chelsea says she wants to celebrate her 9-year-old’s birthday by taking her to an escape room. Cole agrees it sounds like a good idea. Chelsea already has a plan in the works. She tells Cole, “I invited my eyelash lady. Her daughter and Aubree have really hit it off. I think that will be perfect.” Teen Mom 2 airs Mondays at 9 om MTV.