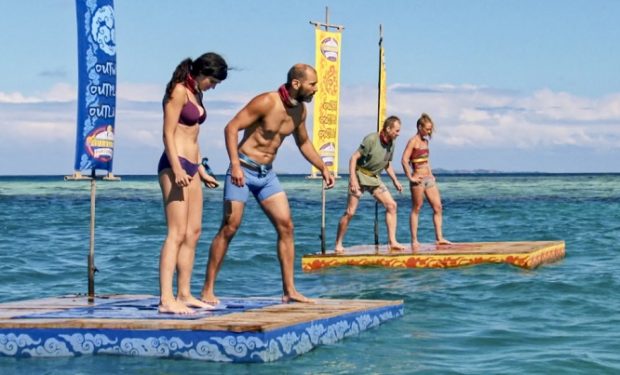 Survivor fans will be holding their breath while watching the Survivor: Edge of Extinction episode “Fasten Your Seatbelts.” While another blindside could be around the corner after alliances start to crumble, this week’s Reward Challenge is taking the castaways on a plunge. In the sneak peek video below, watch Dan “Wardog” DaSilva awkwardly dive into the water — “off to a slippery start” says  host Jeff Probst — as Wardog begins to swim toward the other team’s platform.

If the comments left on the official Survivor Facebook page are good predictors of challenge results, the 38-year-old ex military law student Wardog will lose and 32-year-old divorce lawyer Aurora McCreary will win the tough physical challenge. After watching the preview, one fan posed an interesting question: Is failing at challenges a strategy for Wardog?

Keep in mind that as a soldier, Wardog earned a Bronze Star Medal for his service in Afghanistan and he said he trained for Survivor by practicing deep diving. Dan told Entertainment Tonight Canada, “I will be playing a completely different game for those first eight to nine days and kind of try to throw [the other players] off kilter.” This is episode 11. Survivor: Edge of Extinction airs Wednesdays at 8 pm on CBS, right before The Amazing Race.

Watch and listen to Wardog talk about his Survivor strategy…

Wardog getting his Bronze Star Medal…

The Wardog receiving his Bronze Star from a British Brigadier (1 Star General) in Afghanistan (Dec 2012). My LTC in the introduction called me CPT DaSilva aka The Wardog, I cant make that ridiculousness up. Being The Wardog is more than a name it’s a way of life. #GETSOME