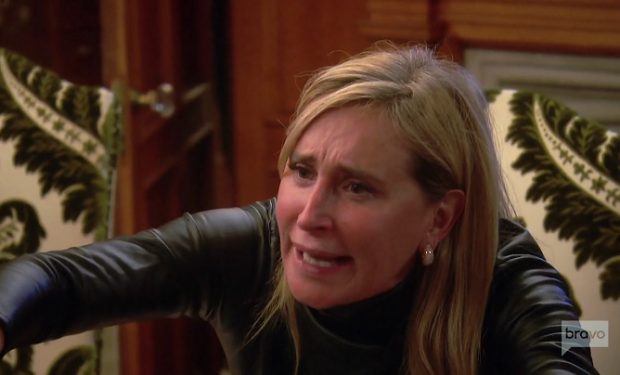 On The Real Housewives of New York City episode “Sleeping with the Fishes,” the ladies are spending their second day together at Dorinda Medley’s Blue Stone Manor in the Berkshires. Dorinda’s late husband Richard bought the home for her as a wedding present, and Dorinda says every room is like a half-a-million-dollar room, even the fish room. After Luann de Lesseps threw a fit over being assigned the fish room, Dorinda then gave the room to Barbara Kavovit, which does goes well.

[Yes, this is a Sonja Morgan prayer candle]

What also doesn’t go over well is the group’s trip to an old Morgan family mansion, Bedford Home. That’s Morgan as in Sonja Morgan’s ex-husband, John Adams Morgan. “I thought Sonja would find that interesting,” says Dorinda. But the visual triggers of “expensive family pieces” throws Sonja for a loop. Ramona pulls Dorinda aside and says, “She’s losing it again. We gotta get her out of her.” They do. But they get back to Dorinda’s manor, Sonja loses it and ends up in tears. The Real Housewives of New York City airs Wednesdays at 9 pm on Bravo.