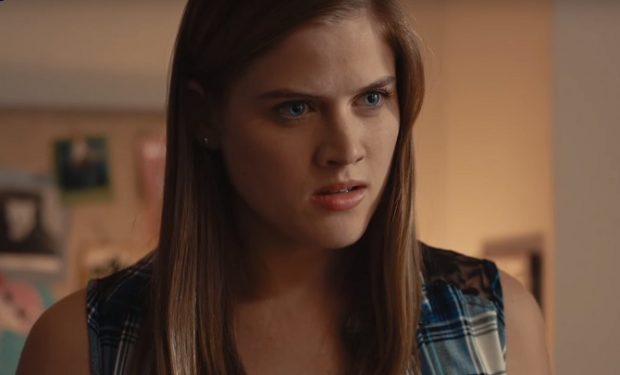 The protagonist of the Lifetime movie My Evil Stepdad is college-bound Ashley (Addy Stafford). She’s worried about her widowed mother Tracy (Jennifer Lafleur) who will be an empty-nester when Ashley goes off to college. So before leaving, Ashley creates an online dating profile without telling her and finds a handsome widow named Jared (Chris Johnson, The Orville). Ashley arranges to have her mother Tracy “accidentally” meet Jared and they hit it off immediately. 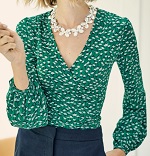 [Ashley wears a green top with white flowers like this one]

Jared describes himself as an entrepreneur who’s working on an app that customizes investment portfolios for banks. But when Tracy’s friend looks Phil (Sam Guinan-Nyhart) into the app, he discovers it’s a scheme. Phil tells Ashley, the app “gathers personal financial information and subverts funds to it.” But that piece of news is delivered too late for Tracy and Ashley.

After their elopement, Jared takes control of every one of Tracy’s financial assets — even Ashley’s credit card. When Ashley needs money for gas, he tells her to take it out of his wallet and then accuses her of stealing. When friend Phil turns up dead, Ashley turns to an investigator of insurance scams. She finds out that, technically, Jared can just dump Tracy and walk away with everything. When Jared discovers that he’s been found out, he tries to leave no witnesses behind. My Evil Stepdad premieres on Lifetime on Friday, April 19 at 8 pm.