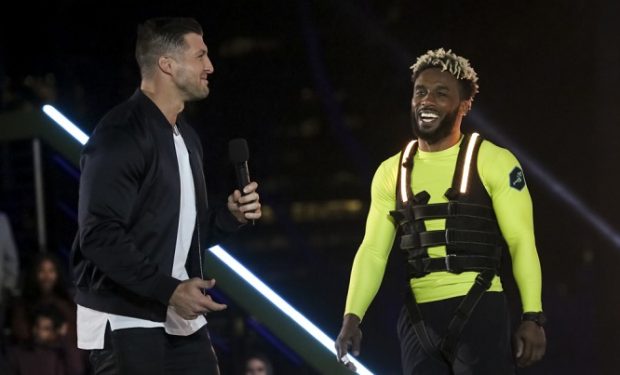 On the second episode of LeBron James-produced obstacle race TV competition Million Dollar Mile, “No One Can Beat Me,” a former college quarterback tries to outrun the youngest Spartan Race winner in history. The former quarterback is 28-year-old Kellen Pagel from Strongsville, Ohio. The youngest Spartan Race winner is 20-year-old Veejay Jones aka “The Prodigy” whose six-times-a-week workouts consist of running mountains, weight training and bouldering. Oh, and he can run a sub-five-minute mile and deadlift twice his body weight. (Gulp.)

Another runner playing against the Million Dollar Mile Defenders is 31-year-old Dashon Johnson from San Diego, California. He’s a Pro MMA Fighter with the ring name “Fly Boy.” The 5’9” super middleweight has been a boxing sparring partner of Conor McGregor and Manny Pacquiao (see photos below). Out of his total 49 fights, he’s won 22, 7 by KO. On Million Dollar Mile, Dashon runs against Emma Chapman aka The Mighty Kiwi. The 30-year-old from New Zealand is 5’2”, 130lbs. and she’s confident that no one will win the $1 million prize against her. Million Dollar Mile airs Wednesdays at 9pm on CBS, right after Survivor and right before SEAL Team. [Related: Who Is 6’2″ Commentator Maria Taylor on ‘Million Dollar Mile’?]