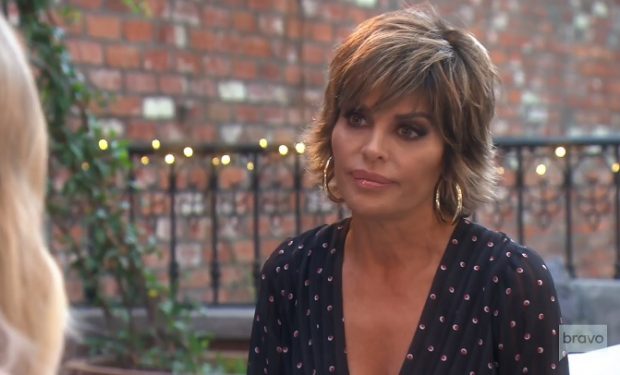 On The Real Housewives of Beverly Hills episode “A Wolf in Camille’s Clothing,” Kyle Richards and Lisa Vanderpump “deal with raw emotions in the aftermath of their fight.” Meanwhile, Lisa Rinna sends a birthday message to Vanderpump via Twitter which “raises a few eyebrows,” according to Bravo. Rinna sent a belated birthday wish with a photo of a woman’s manicured hands touching a plate of cupcakes sprinkled with pills. Teddi Mellencamp tells Rinna “I thought that was so funny.” Rinna says it’s been a running joke in her family. Rinna carries a little plastic bag of pills. On the show, Vanderpump once called Rinna “a traveling pharmacist.”

[One of Lisa Rinna’s books]

When Rinna gave her tweet more thought and was afraid it might be taken the wrong way, she reached out to Vanderpump to make sure it wasn’t. Vanderpump said she was glad Rinna reached out to explain it wasn’t intended in another way because of the way her brother died.

Rinna tells Mellencamp, “I didn’t know her brother died the way he did.” Vanderpump’s only sibling Mark Vanderpump death in 2018 was ruled a suicide.  She has said: “I know my brother well enough to know my brother didn’t mean to do this. It was a cry for help that went horribly wrong.”

Lisa Rinna, whose sister died of a drug overdose when Rinna was six, said: “I would never make a joke out of that.” The Real Housewives of Beverly Hills airs Tuesdays at 9 pm on Bravo, right before Mexican Dynasties. [BONUS: Stream any BRAVO show through the BRAVO Digital App found here. Download is FREE.]

I did not know her brother died of suicide. She never told me. I would never have tweet d the cupcakes if I had known. My own sister died of a drug overdose when I was 6. https://t.co/7WIbOs8cZP