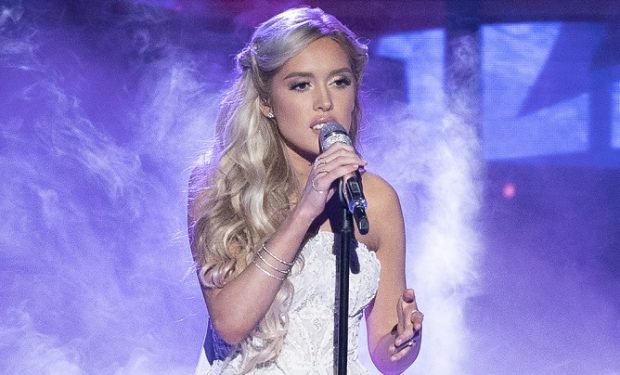 Laci Kaye Booth is the gorgeous blonde country music singer from Livingston, Texas who’s made it to the Top 8 on American Idol. The 23-year-old college student (Sam Houston State University) has been singing since she was 3 and gives a lot of credit to her father, Texas country music artist Jody Booth. When recently interviewed on her local ABC TV Eyewitness News, Laci was asked ‘Did your parents instantly know that this was the real thing, that you weren’t just messin around?’ Laci Kaye said yes, “Around the age of 3 they figured it out.”

[Laci wears a pink trench coat for the interview]

When asked why it was so important for her to audition for American Idol, Laci admits that by age of seven, “I was totally obsessed with it, and my mom has footage of me watching American Idol and me pointing at the TV.” She also revealed that at the time she voted for Carrie Underwood and mimed that she voted by text. “They let you vote at 7, huh?” the anchor laughed. That’s against the American Idol voting rules, Mom! You must be at least 13 to vote! American Idol airs Sundays and Mondays at 8 pm on ABC.