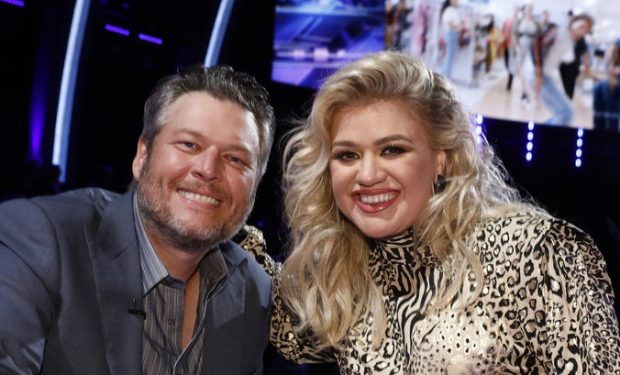 It’s down to the Top 24 on Season 16 of The Voice. While country music superstar Blake Shelton has the most (8) artists left in the competition (his nemesis pop star Adam Levine has the least, 4), reigning champion coach Kelly Clarkson has 6 artists left in the competition. (Rookie John Legend has 6 too.) During the Live Top 24 Elimination show on Tuesday, April 30, America will vote just 8 artists through and each coach will have one save — narrowing the list down to the Top 13. It won’t be easy for Kelly but she’ll look terrific while she decides under pressure.

The day before the Live Top 24 Elimination show, Kelly sent “Designing Women Vibes” on social media as she posed for a photo on The Voice studio lot. The animal print (mostly leopard spots with some zebra stripes) mini dress she’s wearing is by Dundas. Other celebrities who’ve worn Dundas include Beyonce, Jennifer Lopez, and Michelle Obama, to name a few.

P.S. Kelly’s earrings, belt and shoes are by Yves Saint Laurent. The Voice airs Mondays at 8 pm and Tuesdays at 9 pm on NBC.

It’s not the first time Kelly Clarkson has worn a Dundas dress!