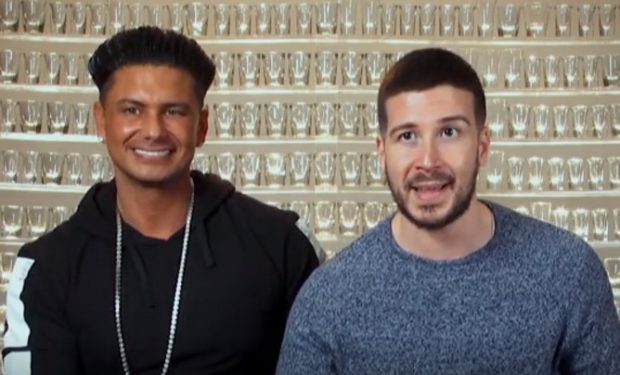 Pauly D and Vinny on Double Shot at Love (MTV)

MTV continues to expand its Jersey Shore franchise. This time the reality TV stars DJ Pauly D and Vinny star in the spin-off dating game, Double Shot at Love with DJ Pauly D & Vinny. Pauly D says he’s financially secure (he drives a white Rolls-Royce) and would like to “share my life with somebody but it’s very different now that I have a daughter.” Vinny says after ten years of having “a lot of sex” he now “yearns for a meaningful relationship.”

On the Season premiere, “Double Trouble,” Pauly D and Vinny move into a mansion aka Guido Palace. Vinny is surprised to see Pauly D’s collection of luxury watches which he keeps in a jewelry store display case that lights up and spins six watches at once. He says, “If I want to find love, I have to show these girls what my lifestyle is like and I can see if they can hang with me or not.” When he hangs a gigantic gold chain necklace on the wall, Vinny observes, “It’s like the biggest mix of no class and luxury I’ve ever seen.” Double Shot at Love with DJ Pauly D & Vinny airs Thursdays at 8 pm on MTV. [Related: Aubrey O’Day Overshares About Pauly’s Anatomy on ‘Famously Single’]