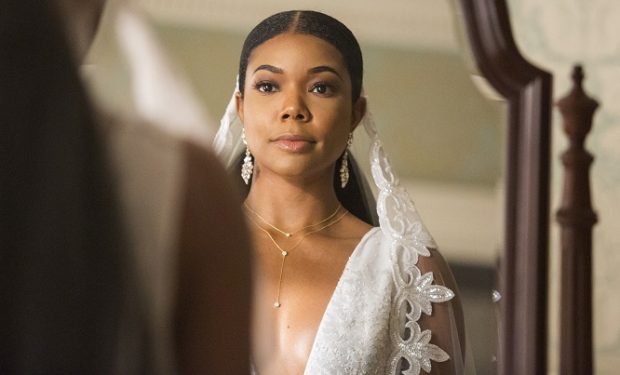 Actress Gabrielle Union reprises her role as TV executive Pauletta “Mary Jane” Patterson one more time in the two-hour series finale movie Being Mary Jane on BET on Tuesday, April 23 (8pm ET/PT). In the Season 4 finale, Mary Jane went to the fertility clinic to have her frozen embryos implanted, right before she came home to a surprise marriage proposal from Justin (Michael Ealy).

In the sneak peek video of the series finale (below), we see everyone filing into the church while Mary Jane takes a look at herself in a mirror, wearing a stunning, plunging neckline white wedding dress (without any material to cover her exposed cleavage) and an insanely long lace veil. Will she really marry Justin after all? Or did she say yes to a new love interest (Morris Chestnut)? You’ll have to tune in to find out.

[For something more casual]

The two-hour series finale is followed by the premiere of the new series Games People Play starring Lauren London as Vanessa King, a woman who married her high school sweetheart Marques King (Sarunas J. Jackson) before he was drafted into a professional basketball league, and no, he does not resist the temptation of female fans.