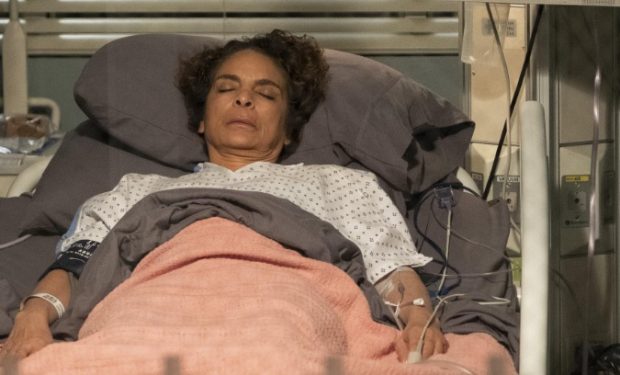 On the Grey’s Anatomy episode “Head Over High Heels,” while Meredith (Ellen Pompeo) struggles to handle an unexpected situation in her personal life, Richard (James Pickens Jr.) has “an untimely reunion” with an old friend. She’s brought into the hospital as a patient.

Richard’s friend is portrayed by Jasmine Guy. She’s known for her roles on The Quad (Grace Caldwell), The Vampire Diaries (Grams), K.C. Undercover (Erica Martin), Dead Like Me (Roxy), and The Cosby Show spin-off A Different World (Whitley Gilbert) created by Bill Cosby, among others. The professionally trained singer and dancer is also known for her roles in films including Harlem Nights (Dominique La Rue) and School Daze (Dina). Fun fact: Guy was one of Debbie Allen’s dancers on the TV series Fame. Grey’s Anatomy airs Thursdays at 8 pm on ABC, right before Station 19.

Debbie Allen shared this photo of her and Jasmine Guy at the Oscar’s in 1991 on her IG. pic.twitter.com/BGxqatLyT0