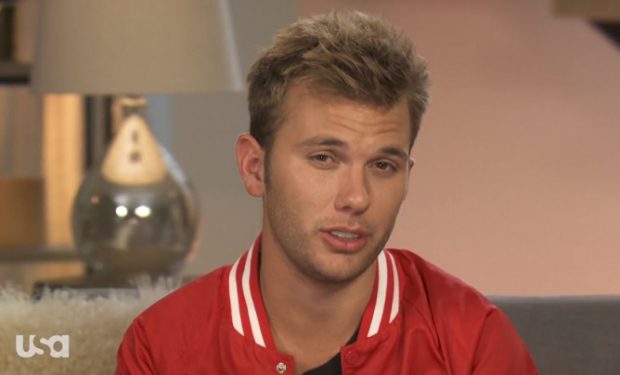 Todd Chrisley’s 21-year-old son Chase Chrisley is starring in the Chrisley Knows Best spin-off Growing Up Chrisley with his 22-year-old sister Savannah Chrisley. The new reality show follows the two young adults trying to make in Los Angeles on their own. They’re not struggling to finance their California living —  their famous father is a multi-millionaire real estate mogul — but they do have professional goals. Savannah is into fashion and Chase is pursing an acting career. He’s also into music, and often shares his opinions on Instagram.

[Chase wears a red varsity jacket like this one]

Just last week, Chase shared a video clip of Laura Ingraham on FOX News “laughing” about rapper Nipsey Hussle’s funeral and falsely reporting that the rapper created the song “FDT” aka “F*ck Donald Trump.” (Artist YG is the rapper behind the song.) Watching the clip enraged Chrisley who in turn called the FOX TV news reporters “Clowns” and “ass clowns,” among other things. See full post below. Growing Up Chrisley airs Tuesdays at 10 pm on USA, right after Miz & Mrs.

This is absolutely one of the most disgusting things I’ve seen. A man lost his life, a mother lost her son, a brother lost his brother. Children lost their father, and a woman lost her protector. How dare you clowns even speak his name. This LEGEND is one of the reasons you clowns have jobs so yall have something to talk about. He had one of the most giving hearts that this generation has seen in a long time. He gave back to his community and created opportunity in places they said was impossible. Shame on you clowns @foxnews I’m still confused why these ass clowns have jobs. Rest easy @nipseyhussle #TheMarathonContinues

Had a blast kickin it with Uncle Snoop