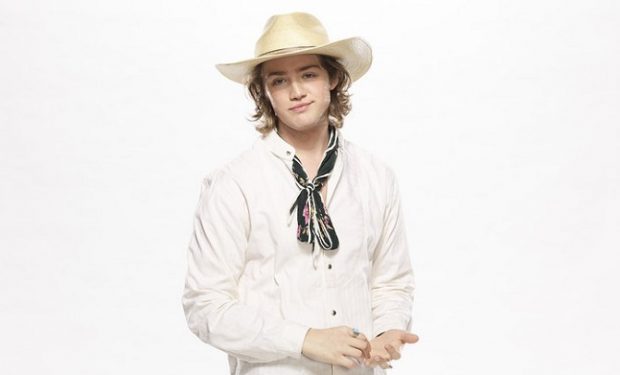 It’s down to 34 artists on Season 16 of The Voice. Returning champ Kelly Clarkson has the most (ten) while the other three coaches, Adam Levine, Blake Shelton and rookie John Legend each have eight artists left on their teams. On Monday, April 15, the Live Cross Battles begin. The singers won’t know who they’re battling until they walk on stage.

[This cactus dress would look cute with Carter’s outfit]

Just hours before the Live Cross Battles, Team Blake’s Carter Lloyd Horne shared a photo of him with Team Legend’s Jacob Maxwell. The two long-haired blondes tagged the photo #jarter. While Jacob is wearing a black flower button-down shirt and pants, Carter is rocking a white suit printed with a desert landscape (on the bottom of the jacket and sleeves and the pant legs). And as a juxtaposition, his fingernails are painted black. See photo below. The Voice airs Mondays and Tuesdays at 8 pm on NBC.