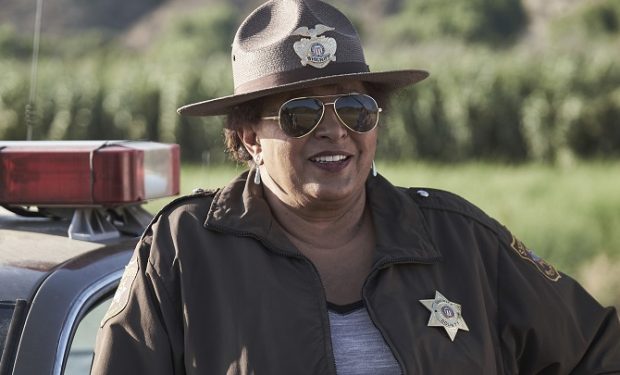 Bless This Mess is a new sitcom about newlywed couple Rio (Lake Bell) and Mike (Dax Shepard) who leave their lives in New York and move to Nebraska to become farmers. They thought it will be a simpler life – a la Green Acres — but it’s not. To keep them on their toes is Sheriff Constance Terry who’s portrayed by Pam Grier.

Grier got her big break landing roles in several of Jack Hill’s women-in-prison (The Big Doll House) and early 1970s blaxploitation movies including Foxy Brown and Coffy. Grier also had an interesting love life: she’s dated basketball star Kareem Abdul-Jabbar before he converted to Islam (he starred at UCLA when he was known as Lew Alcindor), comedian Richard Pryor (see photo below), and comedian Freddy Prinze. Bless This Mess airs Tuesdays at 9:30 pm on ABC, right after black-ish and right before The Rookie.