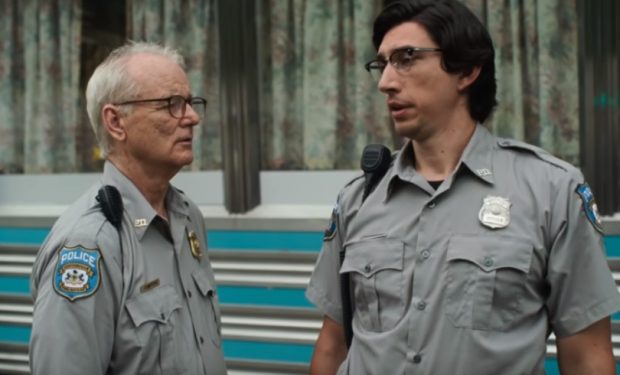 Iconoclastic director Jim Jarmusch is back with a movie only he could make. And typically the quirkier end of the Hollywood A-list is in it. Adam Driver stars with Bill Murray in The Dead Don’t Die  — and here they make a classic buddy pic duo of zombie hunters. For Driver this is sort of new territory (though he looks ready), but as you all know Murray is an old hand at pursuing the supernatural, having been an original ghostbuster. (Murray is OG in every way.) Here is Murray in the new trailer for The Dead Don’t Die. And below that is Murray reveling in Ghostbusters glory. It’s like riding a bike, right?

Good news for Jarmusch and company: as you can see Murray has already accepted an award for a great zombie movie, Zombieland.

[The one and only ZOMBIELAND starring Woody Harrelson, Jesse Eisenberg, Emma Stone]

Besides Driver and Bill Murray, Tilda Swinton, Tom Waits and other Jarmusch regulars populate the proceedings, along with some current pop culture royalty like Selena Gomez and RZA. Chloë Sevigny, Steve Buscemi, Danny Glover, Rosie Perez, Iggy Pop, Sara Driver, and Carol Kane are among those who appear. The Dead Don’t Die hits theaters on June 14.

The greatest zombie cast ever disassembled. #TheDeadDontDie is a new film from @jim.jarmusch. Watch the full trailer at the link in bio, in theaters June 14th.