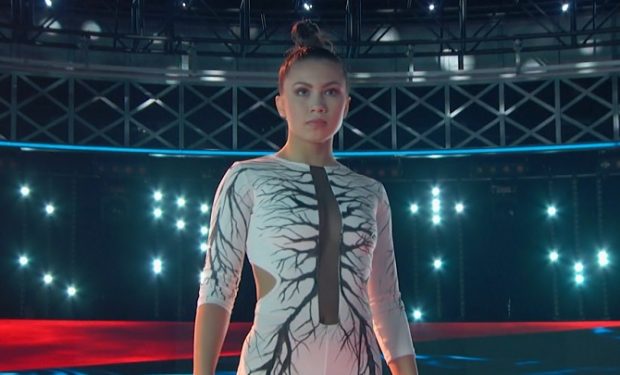 Denise of Denise & Josh on World of Dance, The Duels (NBC)

On World of Dance, judges Jennifer Lopez, NeYo and Derek Hough watch the first round of The Duels (March 17). The top qualifying acts from each division choose a rival and face off in a head-to-head elimination duel. In the Upper category: it’s male salsa duo Jonathan Y Jorge vs. teen contemporary duo Denise & Josh from Ontario, Canada.

Jonathan Y Jorge impress judge JLo with their fast-paced performance set to the Tony Succar song “Me Enamoro Mas De Ti” featuring Jean Rodriguez. Denise & Josh deliver a quieter, emotional performance set to the emotional Billy Lockett song “More.” (The song was written after the death of Lockett’s father, and is said to reflect his strained relationship with his father — see link above.) Comparing the two performances is like comparing apples to oranges, they’re just that different.

Keep in mind, during the qualifiers, after Denise & Josh performed to Dermot Kennedy’s “An Evening I Will Not Forget,” JLo said the routine (which Josh choreographed) left her breathless. NeYo commended the duo for bringing “real emotion” to the stage. Before locking in their scores, JLo told Denise to work on her upper body movement. “You’re the girl, we should always be looking at you.” Denise took that advice and earned more attention with their “More” performance — that’s for sure. It’s haunting. World of Dance airs Sundays at 8 pm on NBC, right before Good Girls. [BONUS: Stream any NBC show watch LIVE on any device with NBC UNIVERSAL app available here. Download is FREE.]