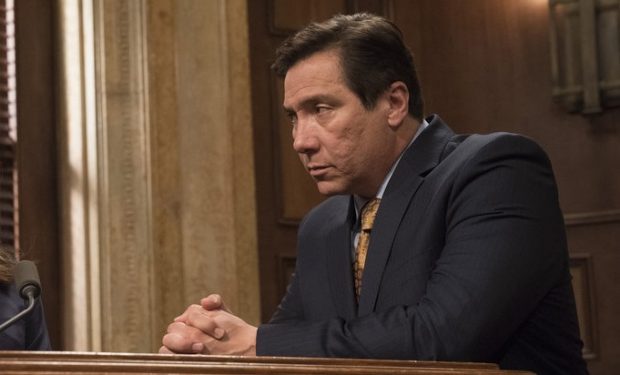 On The Blacklist episode “Bastien Moreau”, while Liz (Megan Boone) and the Task Force continue their search for The Corsican (Christopher Lambert), FBI Agent Cooper (Harry Lennix) tries to appeal to the President of the United States (former Senator Robert Diaz) at the White House on Red’s (James Spader) behalf. It’s a long shot. Remember, Reddington stole $300 million from Diaz, when he was a presidential candidate, in an attempt to lure Blacklister Kirk to the United States (although Kirk didn’t take the bait).

[Check out Martinez on Sons of Anarchy]

Senator tuned President Diaz on The Blacklist is portrayed by actor Benito Martinez. The Golden Globe winner is known for his roles on Netflix’s 13 Reasons Why (Sheriff Daughtry), How to Get Away with Murder (A.D.A. Todd Denver), American Crime, House of Cards (Hector Mendoza), Sons of Anarchy (Luis Torres, see link above), Supernatural (Edgar/Leviathan), Saving Grace (Ronnie), and The Shield (David Aceveda), among many others. The Blacklist airs Thursdays at 9 pm on NBC, right after Blindspot and right before Dateline.