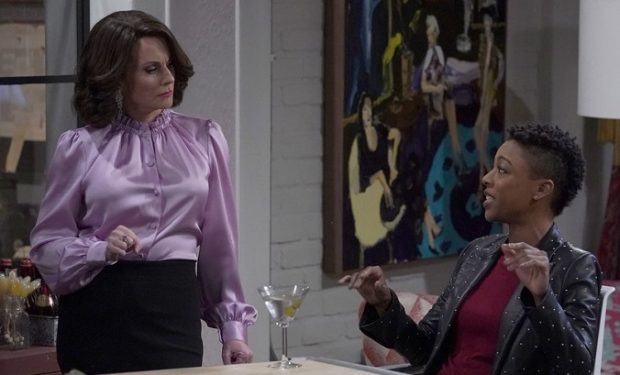 In the Will & Grace episode “Conscious Coupling,” Will’s (Eric McCormack) and Grace’s (Debra Messing) boyfriends, McCoy (Matt Bomer) and Noah (David Schwimmer), ask them to move in, and Will and Grace use each other as their excuse to get out of it. Meanwhile, a snowstorm keeps Karen (Megan Mullally) at the office, where she meets Nikki, a woman who works upstairs.

[Watch Wiley as Moira in The Handmaid’s Tale]

Nikki is portrayed by Samira Wiley. She is known for her roles on Ryan Hansen Solves Crimes on Television (Detective Jessica Mathers), You’re the Worst (Justina Jordan), The Handmaid’s Tale (Moira, for which she won a Primetime Emmy Award in 2018, see link above), and Orange Is the New Black (Poussey Washington), among others. Fun fact: Wiley is married to OITNB producer and writer Lauren Morelli. Will & Grace airs Thursdays at 9:30 pm on NBC, right after Brooklyn Nine-Nine and right before Law & Order: Special Victims Unit. [BONUS: Stream any NBC show watch LIVE on any device with NBC UNIVERSAL app available here. Download is FREE.]

#wcw and I been considering… Should we dye them black and wear ‘em for #Halloween?? 🤔 Don’t worry. We’re not doing that. 😏 (Wait…we’re not, right, @lomorelli? I forgot).