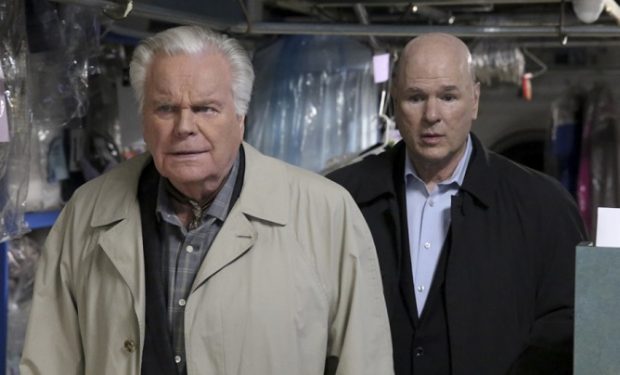 In the NCIS episode “Bears and Cubs,” the team investigates a murder. The victim appears to have been attacked by a bear but Dr. Jimmy Palmer (Brian Dietzen) isn’t 100% sure. He’s surprised when his father-in-law Ed Slater comes to visit him at work and demands that he call it a bear attack saying “it’s a matter of life and death.” Ed’s poker buddy, Anthony DiNozzo Sr. (Robert Wagner), offers to help with the case. He says, “It could get messy” and he’s right. Jimmy admits he lied to Gibbs (Mark Harmon) who of course figures that out on his own.

[Check out Miller on Seinfeld as The Doorman]

Jimmy’s father-in-law Ed Slater is portrayed by comedian Larry Miller. He’s known for his roles in a variety of films including The Nutty Professor (Dean Richmond), Pretty Woman (Mr. Hollister), 10 Things I Hate About You (Julia Stile’s father Walter Stratford), and in the Christopher Guest films Waiting for Guffman (Glenn Welsch the Mayor), Best in Show (Marty), and A Might Wind (Wally Fenton), and among many others. NCIS airs Tuesdays at 8 pm on CBS, right before FBI.