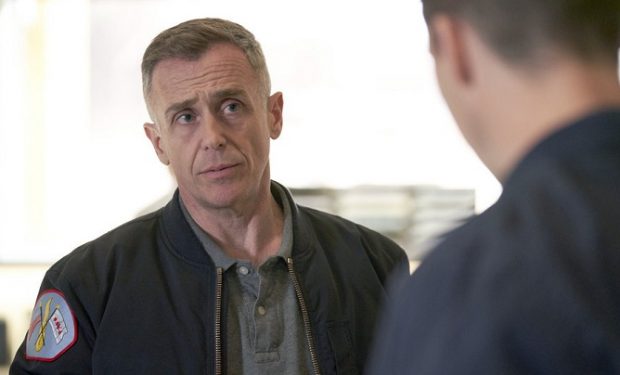 In the Chicago Fire episode “Move a Wall,” tensions run high between Casey (Jesse Spencer) and Herrmann (David Eigenberg) after the firehouse responds to an apartment complex fire. When Herrmann made a crucial mistake at the site, Casey accuses Herrmann of putting the rescue in jeopardy. When Casey reports to Boden, he says, “Any other house, he’d be written up.” Meanwhile, Herrmann’s wife Cindy, the mother of his five children, hopes to get her interior design business on track by redoing the common room. It’s awkward.

Herrmann’s wife Cindy Herrmann is portrayed by actress Robyn Coffin. She’s also recognized for her roles on Empire (Dr. Francine Katz) and in the 2015 film The Life and Death of an Unhappily married Man, among others.

[Check out Coffin as Dr. Katz on Empire]

Chicago Fire airs Wednesdays at 9 pm on NBC, right after Chicago Med and right before Chicago P.D. Or maybe you recognize Coffin from one of these hilarious TV commercials…[BONUS: Watch LIVE on any device with NBC UNIVERSAL app available here. Download is FREE.]