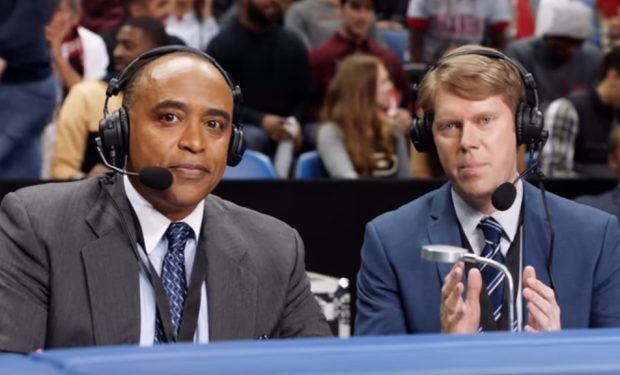 AT&T has a great thing going with its “Just OK is Not OK” series of TV commercials. Our favorite is the Just OK surgeon talking in pre-op to a rightfully nervous patient. But on point and on time for the NCAA tournament, AT&T has introduced a pair of perfectly absurd college basketball announcers for their March Madness campaign — and the “Just OK” color commentator — portrayed by Second City veteran Tim Baltz — is a masterpiece of comedy.

The dense color commentator in the ads misunderstands just about everything — starting with the fact that his job as color commentator is not actually to talk about the colors of the teams’ uniforms. (That said Phil does do an excellent job of describing the colorways of the Purdue Boilermakers — “rich black jerseys with accents of old gold that could also pass for a sunflower shade of yellow.”)

Even when his bemused play-by-play partner Ken (Mark Neely) explains that analyzing colors isn’t the gig, Phil, staying in character with the tenacity of a Colbert Report era Stephen Colbert, persists: “Yellow is called a secondary color, Ken…” As a comedy moment, it’s as golden as Purdue’s uniform accents!

The two actors couldn’t be better, with straight man Ken portrayed by the reliably excellent Mark Neely and obtuse Phil portrayed by actor/comedian Tim Baltz, whose genius-level timing and commitment are products of his work with Second City. Baltz is currently starring in Shrink as David Tracey, an underemployed psychoanalyst operating out of his parents’ garage. (Baltz is a co-creator on Shrink, which is streaming on Hulu.)

When Baltz isn’t being highly entertaining, he’s being highly engaged — especially on the issue of climate change about which he recently wrote: “Would be great if, you know, absolutely everyone alive could talk about this non-stop until something’s actually done about it.” Baltz also happens to be a big hoops (and Chicago Bulls) fan with a noteworthy basketball card collection. More of the commercials below.