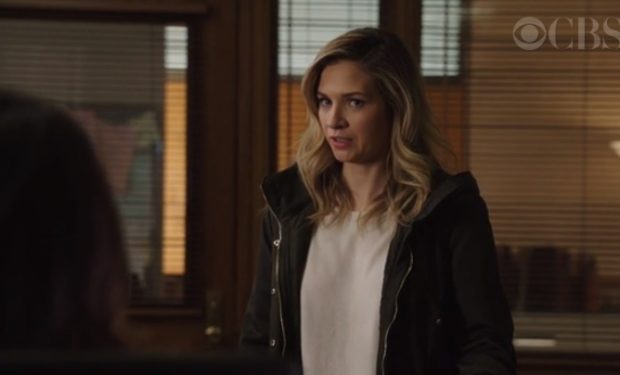 On the Blue Bloods episode “Past Tense,” while NYPD detectives Danny (Donnie Wahlberg) and Baez (Marisa Ramirez) investigate the murder of a woman who was killed in her apartment, Jamie (Will Estes) and Eddie (Vanessa Ray) visit Erin in her office. They’re not there to talk about the wedding. They want to know why Don Voorhees isn’t in prison. Last year, Jamie and Eddie arrested the parole officer who was abusing his power (see episode link below). Now they’re surprised to learn that Erin “handed off” the case to another A.D.A. The problem with the case was: all of Voorhees’ victims were ex-cons, none of whom would testify. Jamie and Eddie say Voorhees now wants payback and he’s getting it by siccing IAB on Eddie and posting racist propaganda online under Jamie’s name.

[Watch Jamie and Eddie arrest Voorhees in this episode]

Vengeful parole officer Don Voorhees on Blue Bloods is portrayed by James Le Gros. He’s known for his current role on the TV series The Passage (Secretary of State Horace Guilder), Ally McBeal (Mark Albert), and for his roles in a variety of films including Certain Women (Ryan), Mildred Pierce (Wally Burgan), The Last Winter (James Hoffman), and two with Matt Dillon — Singles (Andy) and Drugstore Cowboy (Rick), among many others. Blue Bloods airs Fridays at 10 pm on CBS, right after Hawaii Five-0. [NOTE: Stream any CBS show through Amazon Prime or CBS ALL-ACCESS. Both options offer free trials.]