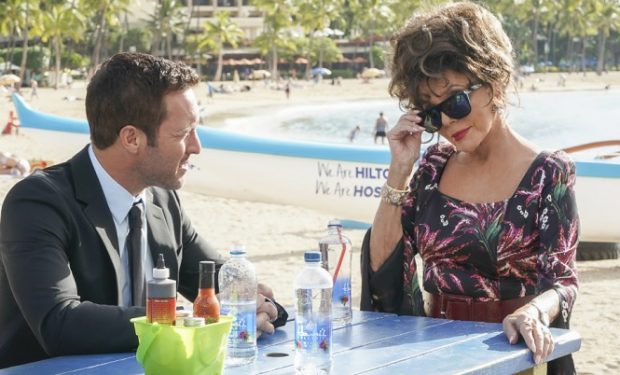 In the Hawaii Five-0 episode “Ai no i ka ‘ape he mane’o no ko ka nuku (He who eats ‘ape),” Tani (Meaghan Rath) and Junior (Beulah Koale) go undercover at a gym to track down the source of steroids that are killing users. Meanwhile, Danny (Scott Caan) and McGarrett (Alex O’Loughlin) stand in as bodyguards for Danny’s high maintenance ex-mother-in-law, Amanda Savage, a famous romance novelist who was never a big fan of Danny’s and vice versa.

[Watch Collins as Alexis on Dynasty, you won’t regret it]

Danny’s ex-mother-in-law Amanda Savage is portrayed by Dame Joan Collins. The 85-year-old English actress is known for her roles on American Horror Story (Bubbles McGee, Evie Gallant), The Royals (The Grand Duchess Alexandra of Oxford), Guiding Light (Alexandra Spaulding), Pacific Palisades (Christina Hobson), Dynasty (Alexis Carrington Colby), and in the 1976 TV mini-series Arthur Hailey’s The Moneychangers with Kirk Douglas and Christopher Plummer, among others. Fun fact: Joan Collins is the big sister of the late romance novelist Jackie Collins, who died in 2015. She was 77. Hawaii Five-0 airs Fridays at 9 pm on CBS, right after MacGyver and right before Blue Bloods. [Related: Who Is Danny’s Ex-Wife Rachel on ‘Hawaii Five-0’?]