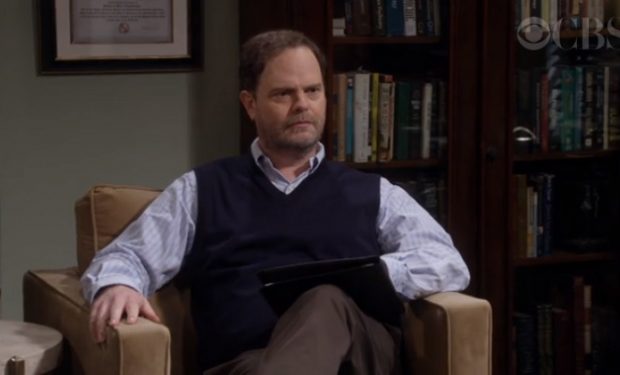 In the Mom episode “A Dark Closet and Therapy with Horses,” while Christy (Anna Faris) battles her urge to gamble on sports while helping Adam (William Fichtner) at the bar, her mother Bonnie (Allison Janney) reluctantly consults a therapist, Trevor Wells, for help with her ADD. It’s an awkward first session as Trevor just sits there and stares at Bonnie until she initiates a conversation. But at least they can see eye-to-eye, literally. Janney is six-feet-tall, Rainn Wilson, who plays Trevor, is 6’2″.

[Watch Janney and Wilson in Juno]

Rainn Wilson, the three-time Emmy Award nominee, is best known for his TV roles on Backstrom (Everett Backstrom), The Office (Dwight Schrute), and Six Feet Under (Arthur Martin), among others. Wilson is also recognized for his roles in the films Juno with Allison Janney! (convenience store clerk Rollo) and Almost Famous (Rolling Stone editor David Fenton). Fun facts: Wilson has appeared in two Beastie Boys music videos including Make Some Noise and Fight for Your Right Revisited, both as a Church Goer, and he made his acting debut in 1997 on the daytime soap opera One Life to Live. Wilson will appear next on the series Utopia created by Gillian Flynn, author of Gone Girl and Sharp Objects. Mom airs Thursdays at 9 pm on CBS, right after Young Sheldon and right before S.W.A.T. [NOTE: Stream any CBS show through Amazon Prime or CBS ALL-ACCESS. Both options offer free trials.]

Happiest of birthdays to you @ellenpage! Miss you! 💖