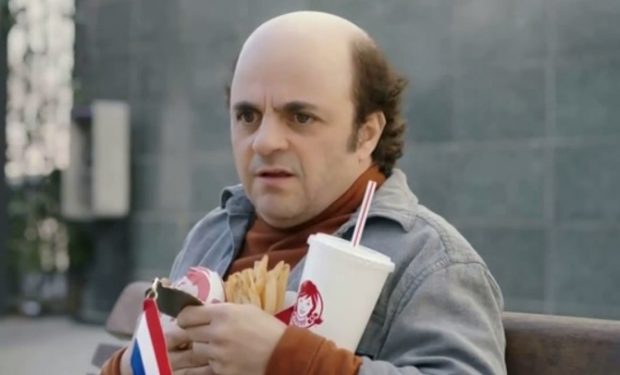 Wendy’s is promoting its new $5 Biggie Bag. In the TV commercial “Everything”, a man sits on a bus stop bench with a $5 Biggie Bag on his lap. When asked about the bag by a man sitting on the other end of the bench, the man with the bag reveals its contents: a new Bacon Double Stack, 4-piece chicken nuggets, small fries and a small drink. “It’s everything you ever wanted for five bucks,” says the man with bag. It even includes “the spelling bee medal you lost in second grade because you couldn’t spell soliloquy,” he says as he hands the medal to the man. “It is everything I ever wanted,” comes the reply.

[Check out Cohen as Schwoz on Henry Danger]

The little man sitting on the bench is portrayed by Michael D. Cohen. He’s best known for his role as Schwoz on Nickelodeon’s very funny Henry Danger. (See link above.) The 5’1″ actor is also recognized for his roles in the 2017 Coen Brothers film Suburbicon starring Matt Damon and directed by George Clooney (as Stretch), and in the Oscar-nominated film Whiplash as stage hand Overbrook, among others. Note: The man with the Wendy’s $5 Biggie Bag is actor Burl Moseley (Jim on Crazy Ex-Girlfriend).