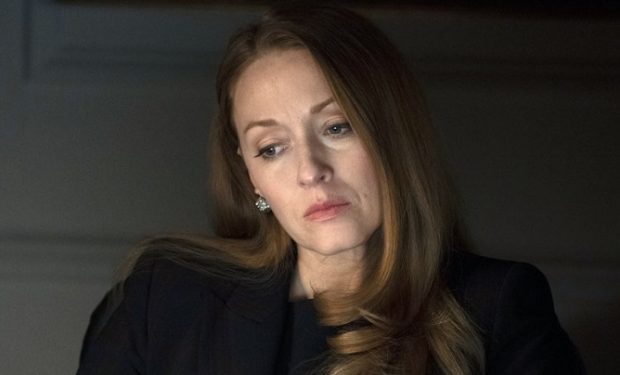 On The Blacklist episode “Bastien Moreau”, while Liz (Megan Boone) and the Task Force continue their search for The Corsican (Christopher Lambert), FBI Agent Cooper (Harry Lennix) puts his reputation on the line to appeal to the White House on Red’s (James Spader) behalf. He’s trying to get the President of the United States to commute Red’s sentence (he’s scheduled for execution). Meanwhile, Anna McMahon in the U.S. Department of Justice is doing her own research.

Anna McMahon is portrayed by Jennifer Ferrin. She’s known for her roles on The Passage (Elizabeth Lear), Rise (the football coach’s wife Denise Strickland), Homeland (Charlotte), Sneaky Pete (Joyce Roby, see link above), Mosaic (Petra Neill), Time After Time (Brooke Monroe), Hell on Wheels (Louise Ellison), The Knick (Abigail Alford), Falling Skies (Rebecca Mason), and The Following (Molly), among others. Ferrin got her big break in 2003 when she landed the role of Jennifer Munson on the soap opera As the World Turns. The Blacklist airs Thursdays at 9 pm on NBC, right after Blindspot and right before Dateline. [BONUS: Stream any NBC show watch LIVE on any device with NBC UNIVERSAL app available here. Download is FREE.]