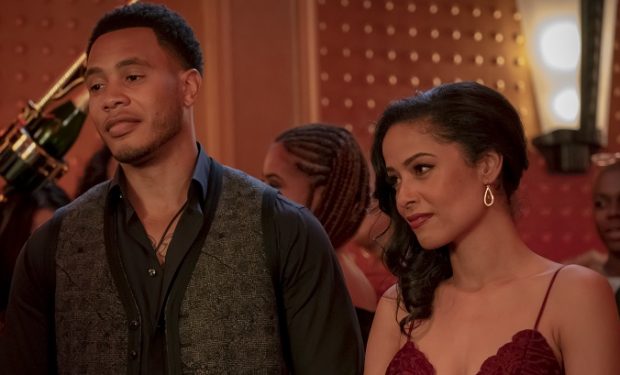 In the Empire episode “My Fault Is Past,” with the control of Empire within reach again, the Lyons must pull out all the stops to prove Lucious (Terrence Howard) and Becky’s innocence in the data-mining scandal. Meanwhile, Cookie (Taraji P. Henson) struggles with Lucious’ past and his son Jeff Kingsley’s (Az Kelsey) place in it, and a mystery begins to unravel.

Teri reappears with Andre (Trai Byers). Last time we saw her was in the December 2018 episode “Had It from My Father,” when Andre wasn’t sure if he should let her into his life. Teri is the mother of Quincy (Skylan Brooks), a young man who was wrongfully incarcerated.

[Watch Golding in The Hunger Games]

Teri is portrayed by Meta Golding. The Haitian-American Cornell grad is known for her role as Enobaria in The Hunger Games movies, and for her TV roles on Colony (Noa), The Tomorrow People (Darcy), CSI (Tina Brewster), and Criminal Minds (Jordan Todd), among others. Fun fact: Golding made her acting debut in 1983 as Brianna Hawkins on the daytime soap opera Loving. In 2018, Golding  played civil rights icon Rosa Parks in Behind the Movement. Empire airs Wednesdays at 8 pm on FOX, right before Star. [Stream any FOX show through the FOX NOW: Live & On Demand app here. Download is FREE.]

ICYMI we recently spoke to @metagolding about playing Rosa Parks in @tvonetv‘s “Behind the Movement.” Listen here: https://t.co/ZDXk7TQZcv [AUDIO] pic.twitter.com/IYq7PEgiXH