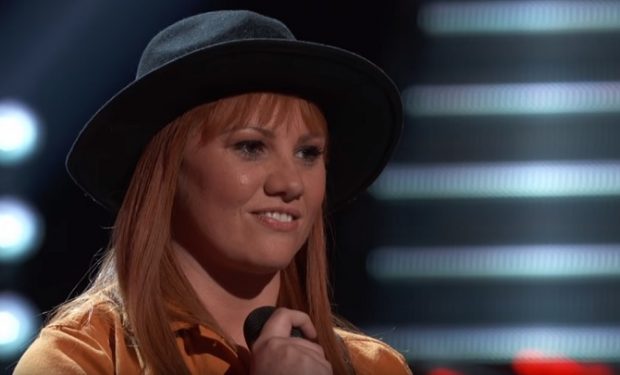 Selkii on The Voice (NBC)

On the fifth night of Blind Auditions for The Voice Season 15, coaches Adam Levine, John Legend, Kelly Clarkson and Blake Shelton listen to the unique voice of indie folk musician Selkii. The South African surfer girl sings the Macy Gray song “I Try” (see link below) with her acoustic guitar. Standing in the wings with host Carson Daly is Selkii’s husband. When Adam Levine turns his chair, Selkii’s husband hollers and jumps and with his big muscular arms pushes Daly in excitement. Daly revels with Selkii’s husband — but then he looks straight at the camera, pops his eyes and mouths silently, “Ow.” (See video below!)

At the very end of Selkii’s performance, Blake Shelton turns his chair around too. Selkii’s husband hollers and jumps again and gives Daly a slight chest bump. When Levine learns she’s from South Africa, he says, “That’s an instant victory for me.” (Adam’s wife is from Namibia.) The Voice airs Mondays and Tuesdays at 8 pm on NBC. [BONUS: Stream any NBC show watch LIVE on any device with NBC UNIVERSAL app available here. Download is FREE.]