Being “very quotatious” is a full time job for raconteur and humorist Shaquille O’Neal, the former NBA superstar and 8th leading scorer in NBA history. From the very contented look of the big fella, eating well (and often) is also at least a part-time gig for the successful restaurateur. Shaq’s holdings already include more than 150 Five Guys Burgers & Fries franchises where he can grab a quick bite. But now he’s opened up a dream of a restaurant across the street from the Staples Center in LA — and Shaquille’s is a massive hit from the get-go.

The menu at Shaquille’s offers Southern-style cuisine in ample portions and, as Shaq promises on Twitter, “service with personality.” What else to expect from Shaq, who has parlayed his size, good sense and good humor into an endorsement machine with a highly lucrative investment portfolio?

In true Shaq style, the dinner menu at Shaquille’s lists just two burger options, the Shaq Burger and Kobe Burger. That may come as a surprise to many since Shaq and teammate Kobe Bryant famously had different visions for the Lakers when they both played there, resulting in a beef that seems to linger despite public professions of peace between the two men. But of course the Kobe Burger is just Shaq being clever once again — the description has nothing to do with Bryant, but instead reveals that the Kobe Burger is made from prime Kobe beef — from a company owned by golfer Greg Norman. Shaq never stops playin’, thank goodness. 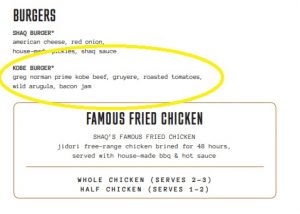 Background: Once a ferocious scorer and rebounder, the post-NBA Shaq is all about the quote and the very personal self-expression he specializes in. During his playing career, Shaq bestowed lasting nicknames on many of his contemporaries, making Dwyane Wade “the Flash” and Paul Pierce “the Truth.” He also called himself “The Big Aristotle” — a world-class moniker if there ever was one.

Here’s a taste of @shaquillesla grand opening party. Thank you all for the love and don’t forget to tag @shaquillesla and myself when you go eat the shaqcrumptious bites pic.twitter.com/MqtHZpQtbb

On behalf of @Shaq, we would like to thank everyone who joined us for our grand opening celebration last night! #Shaquilles #DTLA pic.twitter.com/OsZBSpJ9ZH