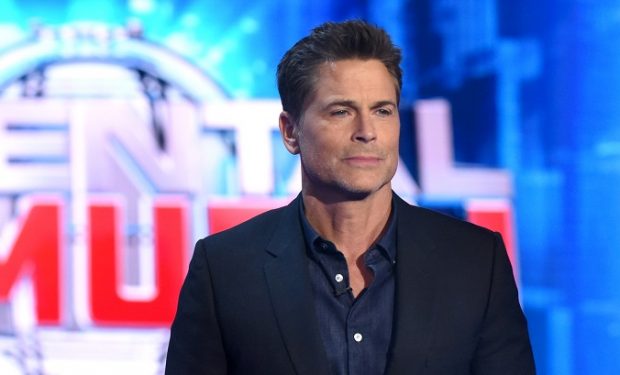 55-year-old actor Rob Lowe didn’t go to college but he sure has learned a lot over the past 40 years working in Hollywood. He’s written about his roller-coaster life and career in his autobiography, the bestseller Stories I Only Tell My Friends: An Autobiography. Some of those stories go way back. After graduating from Santa Monica High School is 1982, Lowe made his big screen debut in Francis Ford Coppola’s The Outsiders with Patrick Swayze, Tom Cruise, Matt Dillon, Emilio Estavez, C. Thomas Howell, and Ralph Macchio.

One year after The Outsiders was released, Lowe starred in The Go-Go’s music video “Turn to You.” Lowe’s character is a handsome young man at a black-tie event held at a mansion in the 1950s where the Go-Go’s are performing as men (except for drummer Gina Schock). The members of the group also play young women at the party. Lowe makes out with lead singer Belinda Carlisle‘s character.

35 years later and Lowe is host of the new FOX game show Mental Samurai — “the ultimate obstacle course for your mind.” Contestants are strapped into a seat that looks like something you’d find at an amusement park. They must answer 12 questions in 5 minutes while strapped into the moving orbital seat. Mental Samurai airs Tuesdays at 8 pm on FOX.