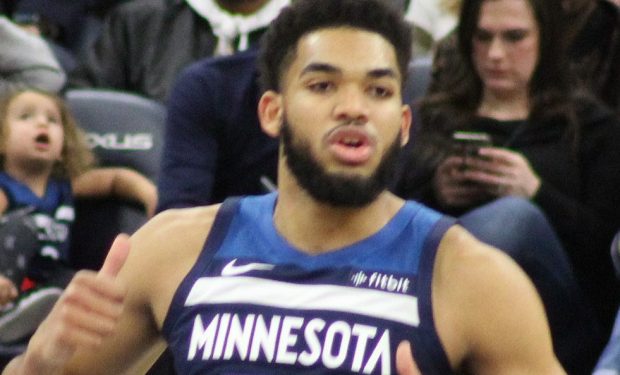 Houston Rockets superstar James Harden is scoring at a 36 points per game clip, a level that the NBA hasn’t seen by anyone not named Michael Jordan or Wilt Chamberlain. But the new look Minnesota Timberwolves, after trading Jimmy Butler to the Philadelphia 76ers, have opened up mega opportunities for the giant basketball talents of versatile big man Karl-Anthony Towns –and Towns is blooming like it’s already spring in Minnesota. To give an idea, since the All-Star break Towns is averaging 35 points per game for the T-Wolves — just one point shy of Harden’s insane pace. Of course, it’s a smaller sample — Harden’s been doing it all season, but the torrid tear Towns is on puts his season average at nearly 25 ppg.

And here’s another factor that tantalizes Wolves fans everywhere about Towns: since Butler’s departure he has more than doubled his assists per game to nearly four, making him really the best all-around performing big man in the NBA right now. Joel Embiid and maybe even DeMarcus Cousins could argue it, but Towns has the numbers. Could a big man like Towns challenge a guard like Harden for the NBA scoring title next year? Kevin Durant is a big man who has won multiple scoring NBA titles, but Durant plays the wing position, unlike Towns. The last true big man to lead the NBA in scoring was a guy named Shaquille O’Neal in 2000.