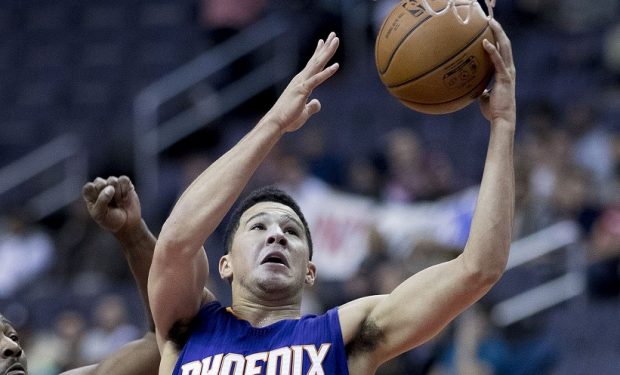 Devin Booker knows crazy; he once had 70 points in an NBA game (photo: Keith Allison via Wikimedia Commons)

The real Derrick Jones Jr. “can legit fly” according to his own Miami Heat Twitter account, and they should know. And for realz there hasn’t been a dunk quite this outrageous since Blake Griffin’s famous throw-down-from-two-feet-away facial over Timothy Mozgov in 2010. (Video below for Jones and Griffin) You can watch Jones’s dunk over and over and still be mesmerized, not quite believing there’s no CGI here and that the cool nerds at Pixar didn’t juice this footage before it was unleashed. But nope, that just DJJ legit flying.

The NBA went bananas after seeing the slam, of course, the viral video hitting everybody just he way Griffin did back in 2010. Griffin’s dunk has many millions of views in the intervening decade — but social media has exploded since and Jones’s flying will likely surpass Blake’s cape act in a day or two. Tell you what, the Raptors bench did a pretty good job of staying cool as it happened right in front of them. But the rest of the league hardly stayed cool about it. Superstar Devin Booker of the Suns described the feeling of watching Jones’s dunk best. “U Crazy Bro” he wrote. Nuff said. Jones, btw, is a third year 6’7″ forward out of UNLV. Booker knows crazy too — he once scored 70 points in an NBA game.