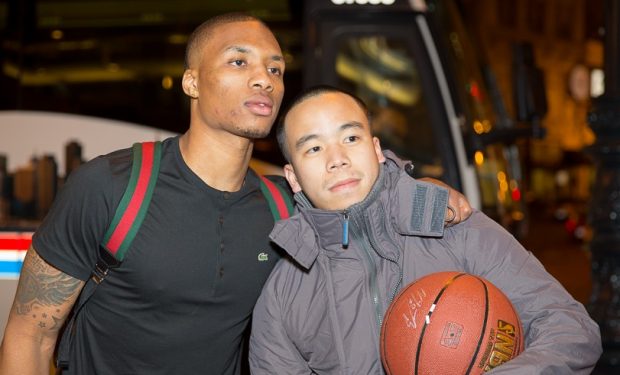 Damian Lillard, one of the most accessible, friendliest NBA stars, with a fan (photo: nikk_la via Wikimedia Commons)

Portland Trailblazers All-Star Damian Lillard got in a little father-son time before the game this week and NBA fans wept for joy. Lillard, a player people love to love, looks like he knows how to deliver the love too, no matter where he is. He can even make the Moda Center in Portland look like an intimate setting — it holds 19,000 fans. Lillard first shared a picture of Dame Jr back on March 29, 2018, when the boy made his debut! (see post below)

But Lillard’s relationship with the boy didn’t just start out strong that day in the hospital. The video below shows that the Lillard father-son relationship keeps growing ever stronger — and that Dame Jr. is looking loved and as cute as can be. His NBA superstar father looks pretty happy too, holding his son pre-game, getting that good luck hug in. Retired Hall of Fame guard Steve Nash, a two-time NBA MVP, explained it best in his tweet about the Lillard duo. Nash said describing the father-son moment that this “is everythangggg!!”