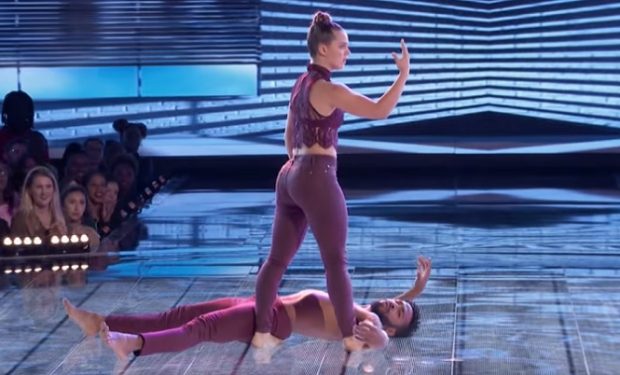 On the second week of qualifiers on World of Dance, Season 3, the contemporary dance duo Derion & Madison from Los Angeles, California deliver a stunning performance set to the song “Genius” by LSD featuring Sia, Diplo and Labrinth. The song is about a person who is a “genius” because “only a genius could a woman like she.” (Sia sings the line: “You’ll be my Einstein, my Newton, my Galileo, and my Hawking.”) During their performance, Derion & Madison wear matching maroon tight jeans – not the standard clothing for dance. Their acrobatic feats are amazing as is — trying to imagine how they do it in those tight jeans have viewers in awe.

[Maroon jeggings are on sale at Amazon]

When the sneak peek video was released (see below), a long thread about those tight pants followed. Many assume they’re wearing jeggings as “no jeans would hold up for that.” Fan Sarah Hutchison can attest the durability of jeggings “just like those” which she has purchased at Walmart and Rue21. World of Dance airs Sundays at 8 pm on NBC. [Related: World of Dance: Teenagers Funkanometry Shake Their Pants For JLo]