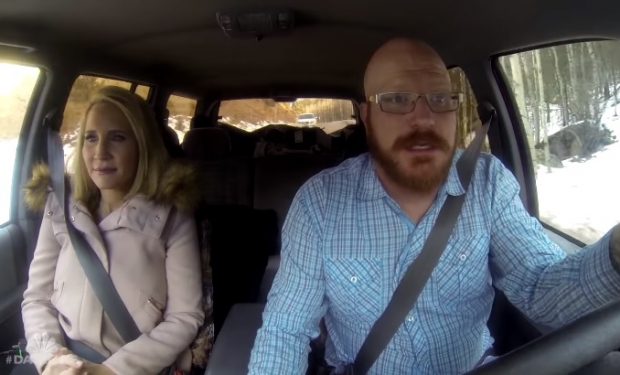 Canning and Dalton on Dateline NBC

Dateline correspondent Andrea Canning travels to the small town of Woodland Park, Colorado to investigate the disappearance of 29-year-old mother Kelsey Berreth. She was last seen at a Safeway supermarket on Thanksgiving Day 2018. Berreth’s fiance and father of her one-year-old daughter Kaylee, Patrick Frazee, has been charged with first-degree murder and solicitation of murder. Although Berreth’s body has not been found, she is presumed dead by local authorities.

On the Dateline episode “The Vanishing of Kelsey Berreth,” Canning interviews Michael Dalton, a local blogger (Woodland Park Underground) who is “consumed” with the case. “I’m just a dad with a phone who took an interest in this case,” he tells Canning. He says he started going to the press conferences and according to Dateline he’s used his amateur status of being “just a dad with a phone” to his advantage. In 2019, he launched a new Facebook page called Dad with a Phone and a YouTube channel where Dalton also comments on the Chris Watts case. Watts is another young man in Colorado who was accused of (and recently confessed to) killing his wife and two children.

On January 12, 2019, Dalton used his phone to live film an encounter he had with Colorado State Highway Patrol. He was pulled over for a broken windshield and for not wearing his seat belt. After being given a citation, Dalton tells the officer, “I don’t need a lecture.” Dateline airs Fridays at 10 pm on NBC. [BONUS: Stream any NBC show watch LIVE on any device with NBC UNIVERSAL app available here. Download is FREE.]