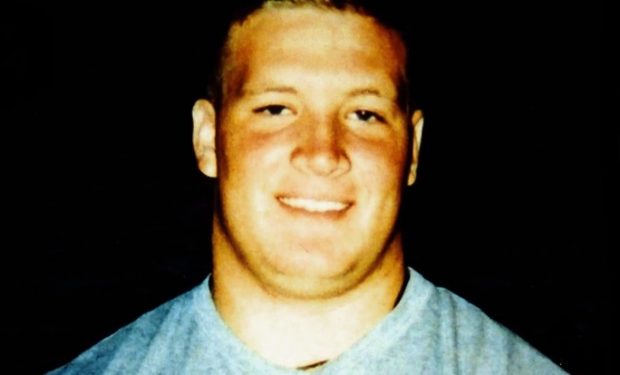 The Dateline episode “The Motive” investigates the July 17, 1994 murder of Trent DiGiuro, a football player for the University of Kentucky who was known as a gentle giant. The 6’2”, 277-lbs. walk-on offensive lineman was shot dead outside of his home in Lexington, Kentucky. He was just days shy of turning 21.

In 2000, Aimee Lloyd stepped forward and said her boyfriend at the time, Shane Ragland, confessed to the killing. She said Ragland’s motive was revenge: he was upset because Trent had prevented Ragland from becoming a member of a campus fraternity (Sigma Alpha Epsilon). Ragland told Lloyd he noticed a party going on at DiGuiro’s house that night, rode a bicycle to the area, and from across the street shot DiGuiro in the head while he sat on the porch.

[Hilary Swank played a sorority pledge in Dying to Belong]

In 2012, Ragland, a UK graduate, sustained a spinal cord injury from a traffic accident which left him unable to walk. He has used a wheelchair since. In 2014, The Darrell Gwynn Foundation offered to donate a wheelchair to Ragland but when the non-profit organization learned of his past criminal record, they rescinded the offer. The foundation reports: “Mr. Ragland was referred to us for a wheelchair donation by a local rehabilitation clinic.” The foundation has a policy that makes any individuals who have been convicted of a felony ineligible for a wheelchair donation. Dateline airs Fridays at 10 pm on NBC. [Stream any NBC show watch LIVE on any device with NBC UNIVERSAL app available here. Download is FREE.]