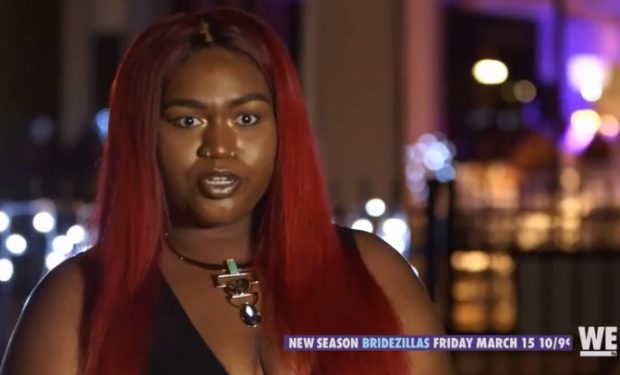 Two outrageous brides star in the Bridezillas episode “HangryZilla & CelebZilla”. The CelebZilla is Shannon Sarich who refers to herself as “The Sex Icon.” The 33-year-old blonde in Anchorage, Alaska was one of the seven stars on Season 10 of Bad Girls Club, a reality show that films hot-tempered women verbally and physically attack each other (see link below). The second bride, HangryZilla, is Jasyln. She loses it during her wild bachelorette party. Wild as in a male stripper who goes by the name “Lethal” gets a partygoer to disrobe and squirts whipped cream on her bare behind. It appears Lethal enjoys his job.

The word hangry, which is a clever portmanteau of the words hungry and angry, means to be irritable due to hunger as demonstrated in Snickers TV commercials. Hangry is in the Merriam-Webster dictionary. Bridezillas airs Fridays at 10 pm on WE. [WE TV Digital App found here. Download is FREE.]