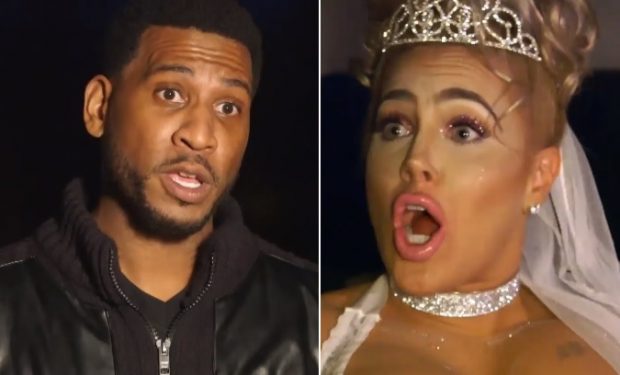 Patrick and Shannon on BrideZillas (WEtv)

In the Bridezillas episode ‘CelebZilla & MeanGirlZilla’, Minnesota MeanGirlZilla Clara battles CousinZilla in an epic meltdown. Clara, 26, accuses her cousin Dani of intentionally having her wedding three weeks before Clara’s. Now Clara is determined to make her wedding perfect “so no one can trash talk my wedding the way I’m talking about her wedding.” Clara shows up at Dani’s wedding and tells guests who are outside smoking cigarettes, “I’ll show you what a real wedding looks like.”

Meanwhile, according to WEtv, the night before her wedding, CelebZilla Shannon Sarich (who was on Season 10 of Bad Girls Club, see link above) has “decided to drown her sorrows at a costume-themed bachelorette party.” At the party (she’s dressed as a sexy bride), it appears Shannon, who has a scantily clad young woman dancing on her lap, has had a lot to drink. When her fiancé Patrick shows up, he tells the cameras, “Here’s the deal, I don’t want this wedding to go bad.” He proceeds to “get her out of there.” Bridezillas airs Fridays at 10 pm on WEtv. [WE TV Digital App found here. Download is FREE.]