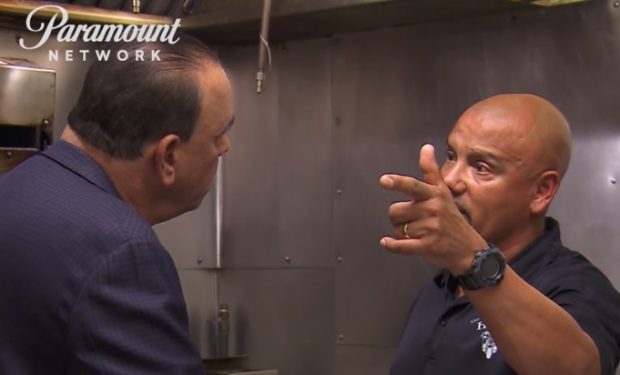 On the Bar Rescue episode “Owner on The Run,” Jon Taffer travels to Tucson, Arizona to check out The Original Hideout and meet the two owners, who are brothers. “These owners have major issues,” says Taffer. When Taffer’s friend, a chef, comes to survey The Original Hideout kitchen, the chef calls it “disgusting” and yells, “You gotta shut this place down.” He’s not pleased with the sight of raw chicken and what he believes is a dirty fryer. When Taffer loses it in the kitchen, Raoul Ramirez, the older brother, tells him, “That’s disrespectful, man.” Taffer tells him, “You’re disrespectful to your customers.”

When Raoul tells Taffer, “I’m trying to do the best I can do,” Taffer tells him very calmly, “The best you can do sucks.” When Raul leaves the bar and walks away, his brother reminds him, “It’s your bar too.” New episodes of Bar Rescue air Sundays at 10 pm on Paramount Network. [Stream any Paramount Network show with the Paramount app here. Download is free.]