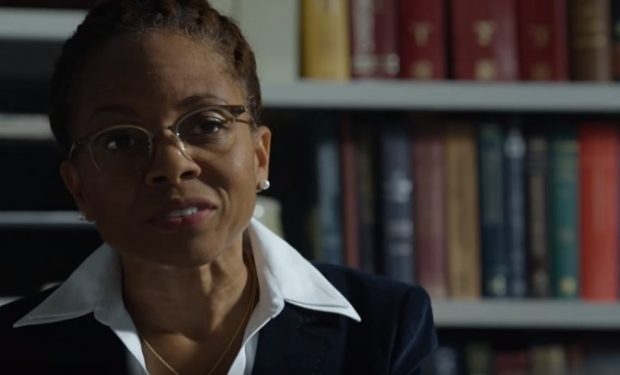 LisaGay Hamilton on THE BLACKLIST (NBC)

In The Blacklist episode “The Ethicist,” Red Reddington (James Spader) is sent to a federal medical institution following his request to the court for a psychiatric evaluation. The psychiatrist he sees says based on what she’s read in the trial transcript “You seem quite capable.” Red argues that he doesn’t know why he’s in court. When she asks if he’s killed people he goes on a diatribe about polluted rivers that kill people and how raising the speed limit kills people to save time.

Red explains that whatever he’s done he thought it was just. That’s why he doesn’t really understand the proceedings against him. The psychiatrist responds by saying she’s going to run a series of diagnostic tests. She starts with the Rorschach Test, which Red refers to as “ink blots” that all resemble genitalia.

[Watch Hamilton as Rebecca on The Practice]

The psychiatrist examining Red on The Blacklist is portrayed by LisaGay Hamilton. The Juilliard School graduate is known for her roles on hulu’s The First with Sean Penn (Kayla Price), Chance (Suzanne Silver), House of Cards (Celia Jones), The Practice (attorney Rebecca Washington, SEE LINK ABOVE), Men of a Certain Age (Melissa), among others.

Plus Cicely Tyson and LisaGay Hamilton are members of the cast this season #HouseOfCards #Season4 pic.twitter.com/IyId0iBJGo