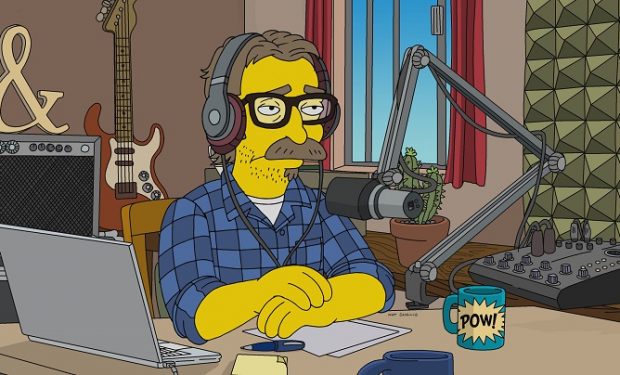 In The Simpsons episode “The Clown Stays in the Picture,” Krusty reveals the untold story of his part in his movie “The Sands of Space.” While Bart and Lisa work as personal assistants on the movie, Krusty promotes the project by doing an interview on Marc Maron’s podcast, WTF with Marc Maron. Maron, in real life, has done more than 900 podcasts with fellow comedians (Chris Rock), actors, musicians (Keith Richards) and even one American president (Obama, 2015) in his garage; the first 100 podcasts are in the Library of Congress. WTF reportedly gets 7 million downloads a month.

[Marc Maron’s Waiting for the Punch]

As an actor, the stand-up comedian Maron is known for his roles on Netflix’s GLOW (GLOW director Sam Sylvia), Maron (as himself), Girls (Ted Duffield), and in films including Mike and Dave Need Wedding Dates. The Simpsons airs Sundays at 8 pm on FOX, right before Bob’s Burgers.