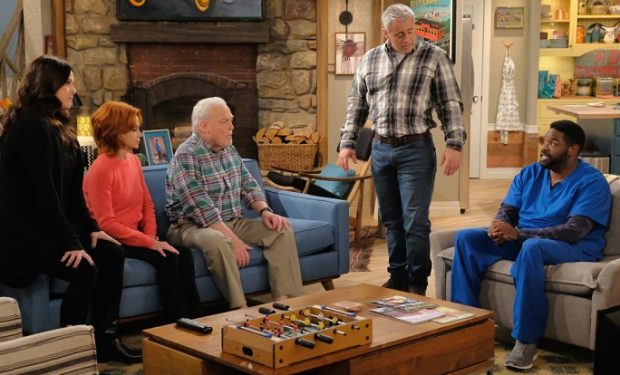 In the Man with a Plan episode “Put Him on the Ground,” when Adam (Matt LeBlanc) sees a boy push his daughter Emme, he instructs his son Teddy to “dish out some old-school justice” to defend his younger sister. When Teddy executes his father’s plan, it’s Andi (Liza Snyder) who has to field a call from school about Teddy’s bullying behavior. Meanwhile, Adam and Don (Kevin Nealon) persuade their father Joe (Stacy Keach) to hire a nurse to help after his upcoming knee surgery. They were not expecting a male nurse.

The nurse is portrayed by Ron Funches. The stand-up comedian is known for his roles on Powerless (Ron), and in the films Once Upon a Time In Venice (SEE LINK ABOVE)with Bruce Willis, Trolls (voice of Cooper), and Get Hard with Kevin Hart and Will Ferrell (Jojo), among others. Man with a Plan airs Mondays at 8:30 pm on CBS, right after The Neighborhood and right before Magnum, P.I. [Watch  It Again: Stream any CBS show through Amazon Prime or CBS ALL-ACCESS. Both options offer free trials.]

Check out Funches doing his thing on Conan…