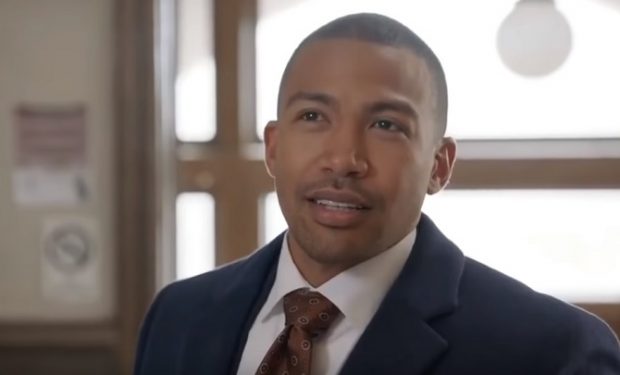 In the Chicago P.D. episode “Ties that Bind,” before the team travels to a Wisconsin gun show to take down a supplier who’s manufacturing “cop killer” machine guns, Blair Williams approaches the precinct’s front desk. Wearing a $1000 suit and a pretty smile, he introduces himself to Sgt. Platt (Amy Morton). He explains that he’s working with Superintendent Kelton (John C. McGinley) who wants her to stand next to him a press conference next week — or as Platt boils it down, on Lake Michigan in February. Blair walks away from the desk defeated but runs into Burgess (Marina Squerciati). He reminds her that they met at the Kelton fundraiser event. He surprises Burgess by asking her out on a date – to see the Joffrey Ballet.

Blair Williams is portrayed by actor Charles Michael Davis. He’s known for his roles on Younger (Zane Anders, see cast photo below), The Originals (Marcel Gerard), Grey’s Anatomy (Dr. Jason Myers, SEE LINK ABOVE), The Game (Kwan Kirkland), and Switched at Birth (Liam Lupo), among others. Fun fact: Davis made his acting debut on an episode of That’s So Raven in 2005. Chicago P.D. airs Wednesdays at 10 pm on NBC, right after Chicago Fire. [BONUS: Stream any NBC show watch LIVE on any device with NBC UNIVERSAL app available here. Download is FREE.]