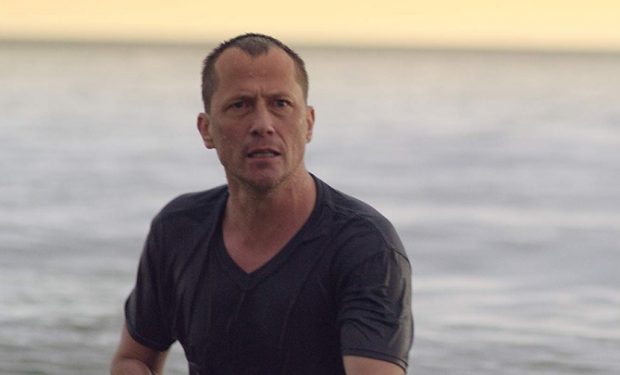 In the Lifetime movie Deadly Excursion, Samantha McCarthy (Samaire Armstrong) charters a sailboat for her and her daughter Ellie (Alexandria DeBerry) while on spring break. At sea, Samantha realizes the captain (Callard Harris, Sons of Anarchy) of the boat is a creep and suspects he’s involved in sex trafficking. When they reach land, the captain tries to bury Ellie alive so he can have the mother all to himself. The good news is David McCarthy shows up (armed) and saves the day.

Hero David McCarthy is portrayed by actor Corin Nemec. Nemec, a former child star, is known for his roles on Supernatural (Demon Christian Campbell), Stargate SG-1 (Jonas Quinn), Parker Lewis Can’t Lose (Parker), Webster (Nicky Papadapolis), and in the 1989 TV mini-series I Know My First Name Is Steven (as Steven Stayner), based on the real story of Stayner who was kidnapped and kept for seven years. Deadly Excursion premieres on Lifetime on Friday, February 1 at 8 pm.

Our next guest is known for his truly memorable roles of PARKER LEWIS(Parker Lewis Can’t Lose) and Jonas Quinn in Stargate SG-1 ! We’re talking about CORIN NEMEC(USA) ! He will be present on both days for autographs and photoshoots! Get your tickets now at https://t.co/Kaj9vrND6P pic.twitter.com/YzFljrSY2a