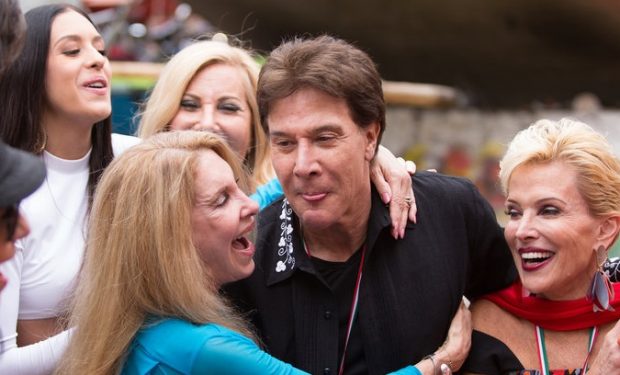 Bravo’s new reality TV show Mexican Dynasties follows a tight knit group of wealthy people in Mexico City obsessed with fame. The patriarch is singer, actor and artist Fernando Allende. Bravo says the 66-year-old was “considered the ultimate heartthrob in his earlier years.” He and his wife of 30 years Mari Allende, who is Fernando’s manager, have two children together: Elan and Adan. They are on the show too, as is Elan’s wife of nine years, Jenny Allende. All three — Elan, Adam and Jenny — are working on their music careers.

Americans might recognize Fernando for his roles on Flamingo Road (Julio Sanchez) with Mark Harmon and Morgan Fairchild or on the TV mini-series Master of the Game starring Harry Hamlin, husband of Real Housewives of Beverly Hills star Lisa Rinna. Mexican Dynasties airs Tuesdays at 10 pm on Bravo, right after Real Housewives of Beverly Hills. [BONUS: Stream any BRAVO show through the BRAVO Digital App found here. Download is FREE.]

Check out Fernando singing below; he reminds us of David Hasselhoff…